Even though it snowed in Metro Washington, DC yesterday, it is still only the middle of November. And while many of you probably do not support my position that the Christmas Season should be restricted to the two weeks from December 15 to December 26, I am confident that many of you, especially those in retail, think that the push of Christmas into almost September in many cases, is excessive.

Today, while sipping my latte from a Christmas themed cup, I noticed that the music playing was, indeed, Christmas carols.

To me, this is excessive.

I grew up in Canada. The Thanksgiving dinner, held in the United States in November is held in mid-October in Canada. Then it is Hallowe’en. Many a Hallowe’en saw me trick-or-treating with a coat under my costume. But no Christmas ornaments were competing with the jack-o-lanterns for attention. And it was not until late November or early December when the Christmas decorations began to arrive.

In the US, it seems to be entirely different. Over the last decade, we have seen Christmas decorations arrive earlier and stay up longer, and incorporate the themes of the holidays it is stepping on. A turkey in a Christmas sweater is very jarring. And of course, the carols. Those insidious earworms that flood the background sonics to the point where they cannot be ignored.

Further, as the Christmas season expands (balloons), we are hearing complaints about it stepping on the sanctity of Thanksgiving. I wrote a post about that fallacy back in 2014, and it is as relevant today as it was then. You cannot have it both ways.

Maybe someday, the economic cycle will be less focused on the fourth quarter as the retail make or break quarter, but until that happens, I cannot see any way to avoid starting Christmas as soon as possible, but could we wait until Black Friday? This Christmas year round is really getting tiring. And I am so tired of hearing Run Run Rudolph.

I noticed the number of posts about the hottest month on record has dropped. Could that be because it has not been very hot, or that, at least here in the US, where it is hot is being balanced (slammed) by the areas that it is not.

Take the Eastern Seaboard. Our Augusts are normally hot, humid. Not pleasant. Between hurricanes and constant rain since June, I am struggling to remember any days over 90 this year and certainly only on or two near 100. DC looks more like Seattle at the moment with the overabundance of rain and very little sun. The wines from Virginia just won’t be for 2018.

And then, there is this. Snow. Inches of snow. According to Al Roker, the DC area has not had measurable snow this early since the late 1980s. The last couple of years we have been wearing light jackets well into January.

Climate is changing. It does. That is the nature of climate. But I am not liking the weather much either. 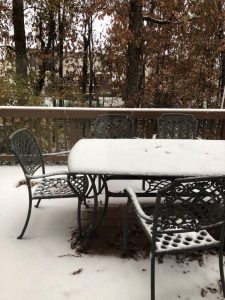