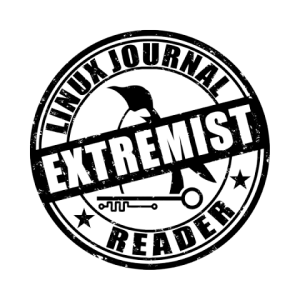 Apparently, not only me, but my fellow Linux Journal Readers (and one assumes, article writers, editors, artists, code monkeys, and celery flingers) are viewed by the United States National Security Agency as extremists. The first of many articles (from the Linux Journal's Kyle Rankin) says:

"While that is troubling in itself, even more troubling to readers on this site is that linuxjournal.com has been flagged as a selector! DasErste.de has published the relevant XKEYSCORE source code, and if you look closely at the rule definitions, you will see linuxjournal.com/content/linux* listed alongside Tails and Tor." You can read the full article at the Linux Journal site (if you dare).

What bothers me is a number of things. First, what business does the NSA have monitoring traffic to and from a US based web site for a formerly US published magazine (LJ is now a digital only magazine)? The NSA is not supposed to have the authority to monitor the site under US law. But of course, since when do these agencies pay any attention to US law?

Secondly, numerous visitors to this (and other FOSS sites) are administrators and security cleared employees and contractors of the United States Government, including the very NSA that has flagged us. This is Orwellian on a number of levels (and my head explodes just trying to follow the mobius strip of that logic).

Finally, this announcement come a month after the US Secret Service put a Request for Proposal on the street for software to help them detect sarcasm in social media.  Why buy software, there are hundreds of 14 year-olds out there that can help you detect sarcasm and it will cost a lot less that automated software. Perhaps the NSA has been sucked in by the heavy focus the denizens in the LJ chatroom (#linuxjournal on freenode.com) put on celery and lube and do not have enough 14 year-olds to help them differentiate between sarcasm and serious discourse.

Let's face it. This is a crock. Not that the NSA is watching us, but that there is anything extreme about the readers, contributors, and staff of the Linux Journal.  Are we passionate? Sure. Are we a bit goofy? What gathering of nerds is not?  Are we extreme? Sure, if we are talking vi vs EMACs, or what SHA value should be used. But we are no more hard core extreme than any other member of the NRA, the local Harley-Davidson motorcycle club, or your local PTA.  In fact, I would argue there are social groups out there that make LJ readers look like a knitting circle.