From this morning’s WTOP: 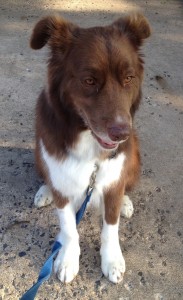 No, seriously, I think Teddy announced his candidacy today. Somewhere between his morning stretch and that bowl of kibble. And, I think, he has all the right qualifications. He is friendly to babies, outgoing, photogenic. He has a strong platform related to ensuring his people are held together as a unit. And he loves the feel of the wind in his ears. I have never heard him say a bad word about anyone, and the fertilizer he spreads around is more robust that what I have heard coming out of the mouths of most of the Presidential candidates so far. The only downside to his personality is his tendency to run as far and as fast as he can when he gets off the leash or out of the yard. But with all the new improvements around the White House, I am pretty sure that getting out is not something he is going to do very often. So when you are considering the options for 2016, I want you to consider Teddy for President. After all, he is just as qualified as any of the other candidates that have declared so far. On both sides of the aisle.