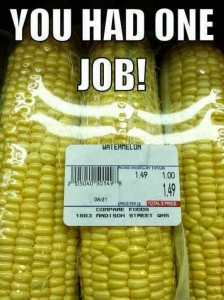 The Congress of the United States, the House of Representatives in particular, has one job, spelled out in the Constitution.

In Section 7 of the Constitution:

All Bills for raising Revenue shall originate in the House of Representatives; but the Senate may propose or concur with Amendments as on other Bills.

So, it is the House of Representatives sole job to allocate the resources that allows the government to function.  This is everything from keeping the lights turned on to keeping the web sites operational and more importantly, serving the American people. And they have failed.

The Affordable Care Act, which the Tea Party is holding the country over a barrel for, is a flawed law. It has issues, bugs, and serious problems. And frankly, I do not think it will do what it was designed to do.  It is not Universal Health Care as it is known in Canada or the EU.  It is not a panacea. But at the moment, it is the law, and the Tea Party does not have the votes to repeal it.  You would think that after more than 40 attempts at repealing the law they would get the message, but clearly they have not. And the Republican leadership is certainly not doing their job, which is leading. Instead they have caved and are following the lemmings over the cliff and taking the rest of the nation with them.

Congress has one job.  And it cannot even manage to do that effectively.  Again.